Facts you need to know about the Indo-China border clash at Galwan Valley! 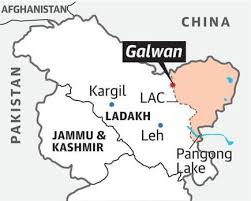 There are a lot of information out there regarding the clash with India and China on 15th June 2020 but let's discuss about some facts in a nutshell.


Precap -
On 6th June, there was a de-escalation talk held between India and China which concluded on a decision that both the armies need to move back by a kilometre each in that area as a first step to exclude any further conflicts.
As part of that process, a buffer zone had been agreed to be created between the LAC and the junction of the Shyok and Galwan rivers in order to avoid any face-off between the two armies.


What happened on 15th June -
After these decisions were made, Colonel B Santosh Babu noticed that there is one Chinese camp still there near the patrolling point.
On 15th June during night time, Indian soldiers went to that Patrolling point to make sure Chinese camps are removed as per the deal, Indian soldiers didn't carried any weapon to make sure there is no escalation but what they got in return, China started throwing sharp stones and even the Baseball bats wrapped with Barbed wire were used by the Chinese troops, they also used Iron rods to assault Indian soldiers, this fierce hand to hand battle went for around 8 hours and finally one Chinese Brigadier commanded his troops to stop it.

This two faced China on one hand says that they do not want any conflicts between India and China but their action says something else, China is a Secular country and all the press and media shows only what it is being said by Chinese officials to showcase as Chinese media it is completely owned and controlled by China so we only see the things which they want us to know.
The best example of this can be seen in the recent COVID-19 case where we actually don't know the numbers of casualties held in China as they are experts in hiding the information.


Some basic info -
LOC is expanded as Line of Control where there is perfectly marked borders between India and Pakistan so as to clear the both sides that which line they are not supposed to cross but LAC being known as Line of Actual Control is a loose demarcation line where most of the points/places are open to interpretation.
That is why there are conflicts between India and China since India's perception for the land is different and China's perception is different.

Since last 60 years, China is not ready to talk about it and come to a conclusion in order to solve these disputes. In the past few years, India started to build borders infrastructure around the Ladakh, DAULAT BEG OLDIE is one of the highest Airstipes in the world and it is very close to Siachen.


Facts -
Most of the people think that this dispute is just for a piece of land in Galwan but the fact says something else, it is for the whole Ladakh! Confused?
Connecting Leh to Daulat Beg Oldie will give a better control to Indians since Galwan is at the peak and the monitoring of the roads of Ladakh can be easily done from this place and hence restrictions of movement of Indian troops can be done, that is why China is trying their best to capture this piece of land but India is very well aware of this fact and not ready to loose a single inch of the land.


Consequences -
If we loose the control or ready to give control to China, then they are ready to occupy entire Ladakh and Arunachal Pradesh in the coming days if India do not take some strong actions now.


China's Perception -
Right now every country is blaming China for the Covid-19 apocalypse and this may be Chinese motive to distract the whole world from this pandemic thing.


Summary -
Chinese main weapon is their lies and arrogance, right now they suppressed the protest of Hong Kong and obviously the world cannot ignore the Chinese aggression in South China Sea and also we cannot forget that they killed 20 Indian troops in Ladakh fighting on 15th June 2020 resulting which the whole world(except few who is already inside China's debt) is standing against China for this agression.
Never forget that Indian soldiers do not sacrificed their life for a piece of land rather they did it for a purpose, so make sure their sacrifices do not go in vain.